Just a few short weeks ago, an elite group of hackers were at it again, spending a day finding bugs for Airbnb and Shopify. But this time the venue wasn’t Las Vegas, it was HackerOne’s San Francisco headquarters. And the hackers weren’t the only ones crushing it: an eager group of students from middle school to college were on hand to interact, learn, and amplify their interest in security and technology.

The involvement of this wide and diverse set of community groups made H1-415 incredibly special for everyone involved. Students at the hackathon were affiliated with the following groups:

In addition to networking and hearing from a host of speakers, the students rubbed elbows with elite hackers from as far away as UK, Sweden, Belgium, Netherlands, Canada, and Poland. Both Airbnb and Shopify talked about their security programs and goals for the hackathon as hackers and students enjoyed lunch together. Then, as the hackers got to work, students heard from Marten Mickos, our CEO, Justin Calmus, our VP of Hacker Success, and top-ranked hackers Frans Rosen and Peter Yaworski. Topics ranged from leadership and entrepreneurship to getting started as a hacker and advanced hacking tips. The sessions ended with a panel answering students’ questions on careers in security and engineering.

On the hacking side, the results of H1-415 were nothing short of impressive. Beyond just the speed at which the world’s best hackers can find vulnerabilities, the amount of bounties paid--and beverages consumed--was equally amazing. In just 8 hours, the 30 hackers earned over $100,000 in bounties! 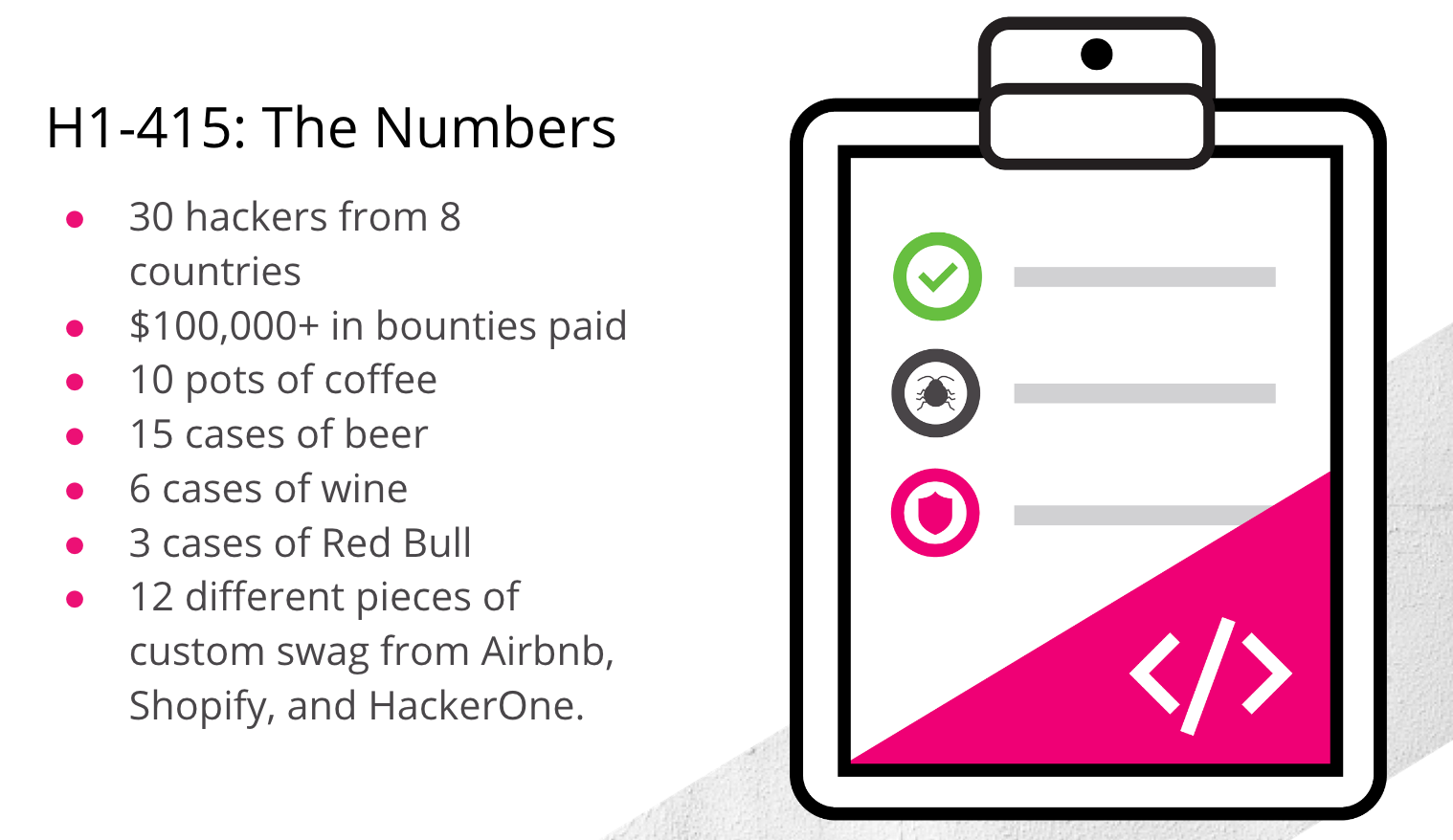 The main goal at a hackathons is, obviously, to find lots of bugs for our customers in just one day. But beyond the great value we’re delivering there, hackers and security teams get to meet each other and build relationships that translate into more secure technology. Security teams get to understand the skills and motivations of different hackers, while the hackers get introduced to more companies and get insights into their needs and goals.

“It’s not about building a relationship for that particular day, it’s about forging bonds that last forever,” said Ted Kramer, HackerOne’s Chief of Staff. “Events like h1-415 empower security teams to find and keep the best hackers, and the hackers get invited to more programs and can make more money. If a company has an existing relationship with a particular hacker, they’ll go the extra mile to keep them involved with their programs.”

As H1-415’s hacking came to a close near 9 pm, dinner was served and awards were presented. Winners of the H1-415 awards were:

We also awarded three hackers with H1-Elite comic book covers for having reputations scores over 10,000 points. Winners were mlitchfield, meals, and fransrosen, and each was presented with a framed print of their comic book cover, custom designed for each winner.

We like to think these hackathons are a great way to deliver an extreme amount of value to our customers in a short amount of time. But we’re also pleased they give us, and our customers and sponsors a chance to engage one-on-one with hackers and promote hacking and technology to the wider community. We know the next elite hacker is out there, so we want to give her or him every opportunity to learn, grow, and participate in this field, no matter where they live or what their age.

PS: We’ll be posting more videos from the event on our YouTube channel. Be sure to subscribe so you don’t miss out!